Researchers from Indonesia and Korea have come together to improve water filtration systems for developing countries especially, releasing the results of a recent study in ‘Three-dimensional, printed water-filtration system for economical, on-site arsenic removal.’

A natural element found on Earth, arsenic is well-known as a toxin for humans in fact, it can damage lungs, the bladder, liver, kidneys, and even cause death. Millions are at risk in countries like China—as well as developing countries—due to contaminated drinking water:

Proposing 3D printing as a potentially affordable and accessible method for filtering arsenic, the researchers state that an automated and reconfigurable device could be created to serve as a ‘chemical-reaction platform.’

Samples were designed in AutoCAD, each with 40mm high exteriors and 30mm outer diameters. Data was transferred to Simplify3D and then the samples were 3D printed on a DeltaBot 3D printer using PLA filament. The iron (III)-oxide coating onto the 3D printed channels.
(A) Calculated internal surface area and total channel volume of the filters as a function of the channel width. The internal surface area represents the total area of the square channels inside the filters (blue circles). The total channel volume is the sum of the empty spaces in the filters that can be occupied by eluent during the filtering process (black squares). (B) Cross-sectional schematics of the sample preparation and filtration processes. Actual photographs are shown in the insets. Upon acidic hydrolysis, carboxylic and hydroxyl groups are formed inside the channels. The hydrolyzed filters are then soaked in an iron (III)-hydroxide solution and dried, leading to iron (III)-oxide deposition onto the surface. The deposited iron (III) oxides are simplified as a formula unit (brown circles). After the sample preparation steps, As (III) solution flows through the filters, and As (III) ions (blue circles) are adsorbed onto the iron (III) oxide. (C) Amount of iron (III)-oxide loading of the filters as a function of the channel width. https://bit.ly/2LKOd73 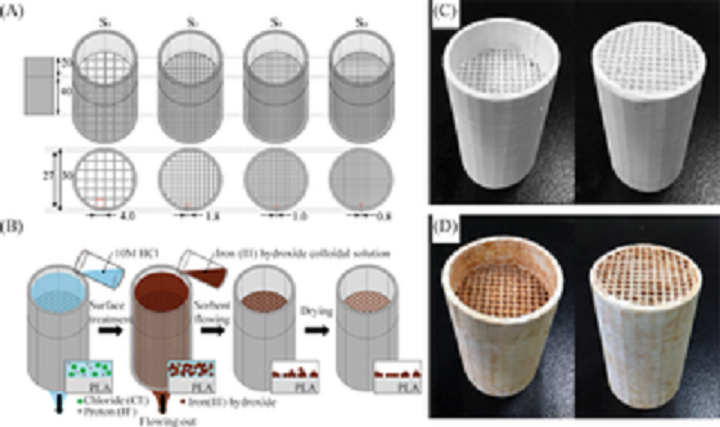 Three-dimension filter design and illustration of sample preparation.
(A) Computer-aided designs of the filters. Four differently sized filters were designed, and the channel widths of the unit squares were 0.8, 1.0, 1.8 and 4.0 mm. All the numbers in the figure are in millimeters. (B) Illustration of the sample preparation process on the surface of a 3D, printed PLA filter: acid hydrolysis, iron-oxide loading and drying. (C, D) Pictures of the top (left) and the bottom (right) of a 3D, printed filter (C) before and (D) after the adsorptions of iron (III) oxide.
https://bit.ly/2WNcXSw

Assessments were performed on the 3D printed devices regarding adsorption of arsenic ions to iron oxides. Ultimately, the researchers noted even distribution of iron. No arsenic was found before the filtration, but a ‘substantial amount’ was on the filter surface. Adsorption capacities of As (III) reported for difference adsorbents.
https://bit.ly/2Tp8O5a

Adsorption capacities of As (III) with iron oxide for different supporting materials.
https://bit.ly/2XeX1r3

“As the channel width became narrower, corresponding to an increase in the internal surface area of the 3D printed filter, (1) more iron (III) oxide (adsorbent) was deposited on the inner surface of the filter, and (2) the flow rate under atmospheric conditions (without external pumping) decreased,” concluded the researchers.

Numerous projects in recent years have involved 3D printing in concert with efforts to improve the water supply around the world, from harvesting pure water with fog harps, to using membranes as barriers to contamination, biodegradable filters, and more. What do you think of this news? Let us know your thoughts! Join the discussion of this and other 3D printing topics at 3DPrintBoard.com.

from Your daily news from 3DPrint.com https://bit.ly/2ARoJCZ